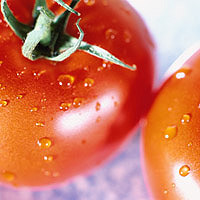 Tomatoes should be rinsed thoroughly before preparation. If they are being used to make tomato sauce for spaghetti or other dishes, they should be peeled and seeded. To peel a tomato, drop it into boiling water for one to two minutes. Then remove and dunk briefly in a bowl of ice water. Cut out a small cone around the stem end and slip off the skin. To seed a tomato, cut it in half horizontally and squeeze the seeds out.

Raw fresh tomatoes are most often sliced onto sandwiches or eaten in salads. They can also be cooked with herbs, onions, and garlic to make homemade spaghetti sauce. Raw tomatoes can be diced and added to soups or stews. Halved tomatoes can also be broiled. Place them on a baking sheet, drizzle with olive oil, and broil until the tops are lightly browned, about five minutes. Tomatoes make an attractive dish when stuffed with crabmeat or with sautéed vegetables, such as spinach and mushrooms, and baked.

Unripe, green tomatoes are often dipped in cornmeal and fried.

Never add canned tomatoes to uncooked beans or grains, since they toughen the skins of these foods, making it difficult to cook them to a tender stage.

Unless they are packed in oil, dried tomatoes (sometimes called sun-dried tomatoes) must first be slightly rehydrated by allowing them to soak in hot water. Dried tomatoes can be chopped and tossed with pasta or vegetable dishes. They can also be puréed with olive oil, toasted pine nuts, and basil to make tomato pesto.

The information presented in the Food Guide is for informational purposes only and was created by a team of US–registered dietitians and food experts. Consult your doctor, practitioner, and/or pharmacist for any health problem and before using any supplements, making dietary changes, or before making any changes in prescribed medications. Information expires December 2021.