Mix Up the Probiotics for Digestive Health 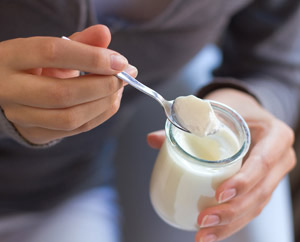 When things go wrong in the gut, the micro-organisms that live there are usually involved. Repopulating the gut with specific strains of friendly bacteria has been found to help some people with IBS (irritable bowel syndrome) and there is growing evidence that a taking a mixture of probiotic species may also relieve symptoms.

Evidence for this comes from a study published in the Journal of Gastroenterology and Hepatology in which 49 people with IBS were assigned to take either one 500 mg capsule of a mixed probiotic supplement or placebo twice a day for four weeks. Each capsule of the probiotic supplement had 5 billion bacterial cells and these were a mixture of six species of intestinal bacteria, including three Bifidobacterium species, two Lactobacillus species, and one Streptococcus species.

The participants filled out questionnaires about their IBS symptoms at the beginning and end of the trial. The following findings were drawn from the questionnaire responses:

Which bacteria made the difference?

“Multi-species probiotics given to IBS patients are effective in the global relief of IBS symptoms as well as in alleviating abdominal pain, discomfort and bloating,” the study’s authors said. “Furthermore, the multi-species probiotic induced alterations of intestinal microbiota.”

If you suffer from IBS, you might be able to reduce your symptoms by taking the following steps to support your beneficial gut bacteria:

Maureen Williams, ND,completed her doctorate in naturopathic medicine at Bastyr University in Seattle and has been in private practice since 1995. With an abiding commitment to access to care, she has worked in free clinics in the US and Canada, and in rural clinics in Guatemala and Honduras where she has studied traditional herbal medicine. She currently lives and practices in Victoria, BC, and lectures and writes extensively for both professional and community audiences on topics including family nutrition, menopause, anxiety and depression, heart disease, cancer, and easing stress. Dr. Williams is a regular contributor to TraceGains Newswire.