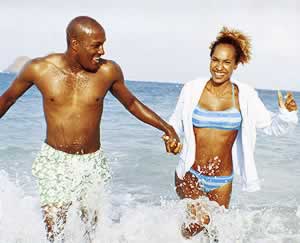 Exposure to sunlight, in moderate amounts, is enjoyable to most people, as well as having certain health benefits.1 For example, direct exposure of the skin (i.e., hands, face, arms, etc.) to sunlight leads to the formation of vitamin D. Adequate amounts of vitamin D in the body prevent rickets and osteomalacia (the deficiency diseases of vitamin D) and reduce the risk of osteoporosis. Seasonal differences in deaths from heart disease have been suggested by some researchers to be partly related to reduced exposure to sunlight in the winter months.2 Ultraviolet light (from sunlight and other sources) has been used to treat psoriasis and some other skin conditions.3 Sunlight has also been linked to reduced risks of prostate,4 colon,5 ovarian,6 and breast cancers.7 The anticancer effect is thought to result from synthesis of vitamin D resulting from exposure to sunlight. Excessive sunlight, however, particularly sunburn, can be detrimental to health in many ways.

Aged Skin
Skin aging is a process of changes in the structure and elasticity of the skin over time. It may be a normal part of aging or it may be due to the effects of ultraviolet radiation, usually through exposure to sunlight. Increased exposure to sunlight directly increases skin wrinkling and aging.8

Macular Degeneration
The macula is a portion of the retina in the back of the eye. Degeneration of the macula is the leading cause of blindness in elderly Americans.13 Sunlight triggers oxidative damage in the eye, which in turn is believed to contribute to macular degeneration.14 In theory, sunglasses should reduce this risk.

Photosensitivity
Several conditions, such as erythropoietic protoporphyria and polymorphous light eruption, share the common symptom of hypersensitivity to light—typically sunlight. People with photosensitivities need to protect themselves from the sun by using sunscreen, wearing protective clothing (such as long-sleeved shirts), and avoiding excess exposure to the sun. People taking certain prescription drugs (sulfonamides, tetracycline, and thiazide diuretics) and those diagnosed with systemic lupus erythematosus are more likely to overreact to sun exposure.15,16 The herb St. John’s wort could, theoretically, make the skin more sensitive to sunlight, but this is rare when used at recommended levels.17 However, fair-skinned individuals should be alert for any rashes or burns following exposure to the sun.